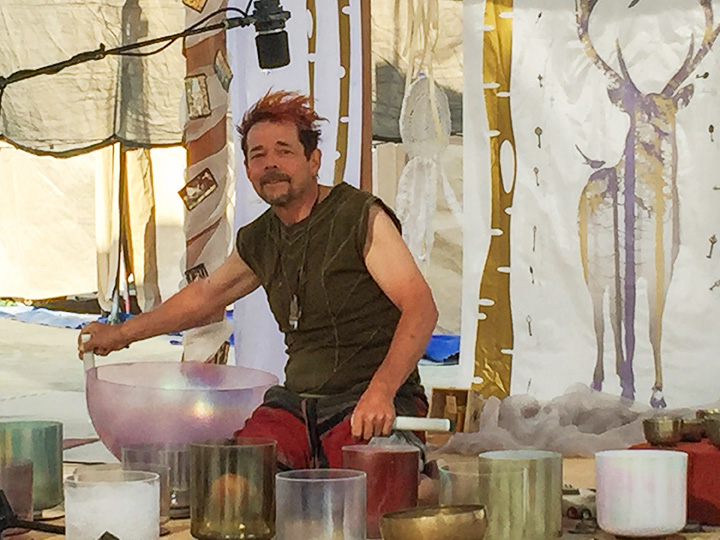 A lifelong resident of the Truckee-Tahoe region of Northern California, Breeze Cross was the 3rd generation owner/operator of Truckee-Tahoe Lumber Co.  Community and industry involvement were cornerstones of his career and he served in a leadership role on numerous agencies, boards and committees.
In February, 2004, he experienced an unsought and unexpected spontaneous awakening of consciousness.  Having no frame of reference for relating to or integrating this experience, it was not long before this state of blissful awareness shut down, opening the door for a journey of exploration into numerous avenues of healing and expanding awareness.  Inquiry, meditation, yoga, dance & healing became passions with influence from Adyashanti, Matt Kahn, HAI, MKP, Oneness University, 5Rhythms, Open Floor Intl. and Stephen Barr.

Breeze-la’s love affair with singing bowls has grown since first experiencing the meditation bowl during an Adyashanti retreat.  Beginning with his own meditation bowl, purchased at the Boudhanath Stupa in Kathmandu, each bowl and instrument has found him, introduced themselves and shared with him their voices and vibrations.

Music & dance have been a life long journey which intensified with his discovery of 5Rhythms thru Michael Stone in Nevada City.  RhythmWave, a conscious dance camp, exploded into his life at BurningMan 2008 and what was already a passion, got lit up to a whole new dimension.  Dancing whenever possible, and attending both weekend and week long workshops became an important part of the journey which eventually resulted in his collaborating and participating as a facilitator at Sierra Conscious Dance in Truckee, CA & Reno, NV.